Microsoft released a brand new generation of the popular service Skype, saying that remade it from scratch.
The emphasis in the new Skype was made exactly to correspond. Updated the chat interface now includes tabs Find (for adding content), Chat (chat) and Capture (here the camera starts to create photo and video).
In the new Skype had their own Story called Highlights. Redesign touched every element of the service interface. Now during razgovory you can use Emoji.
It should be noted that the majority of users perceive Skype as a program for making video and audio calls. Perhaps Microsoft are hoping that the new design will help to attract a large audience to the service.
Source: http://ilenta.com/news/internet/news_16483.html
© www.iLenta.com
More
Comments: 0
Views: 209
Scientists have created "smart" socks

Israeli scientists have invented a "smart" socks that can help patients with diabetes. "Smart" socks connect to your smartphone.
Scientists believe that the new technology can help patients with diabetes to prevent the development of ulcers in diabetic foot — types of complications that can lead to serious consequences, up to amputation of the limb. Smart socks include pressure sensors which are connected to the mobile application and transmit signals in the event of a change in pressure and the state of blood circulation in the feet.
Experts say that these socks require no special care, they can even be washed in the washing machine. Scientists believe that this development will significantly reduce the medical costs associated with complications of diabetes.
Source: VladTime
More
Comments: 0
Views: 221
Chinese robot will pass the entrance exam to the University

Chinese robot model AI-MATHS will attempt to take the national entrance exam in mathematics and become a University student. It is reported that the applicants with the device will appear on June 7 to pass a test of knowledge.
Robot Chinese company Xing Yun Xue Zhun Technology Co. sent to pass the entrance exam, in mathematics, resembling a Russian test of knowledge under the name of the exam. All students must fulfill a certain number of jobs to go to local universities and colleges. The developed device will also try to pass the tests and become a student of a higher educational institution. We will remind that today the Chinese government pays special attention to the development of machines with artificial intelligence.
Robot scientists from China have previously passed the mathematics exam and scored only three points above the passing mark. In the future the scientists of the company have improved the operation of the device, so the experts expect high results. Earlier it was reported that in Sichuan province, the students were able to defeat the robot with a slight margin. Developed new included tests in mathematics together with students.
Source: an
More
Comments: 0
Views: 206
Scientists have found a link between mobile technologies and development of children 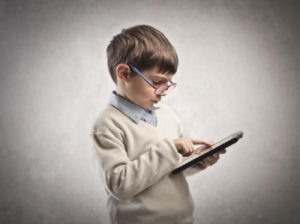 Us scientists analysed how mobile technologies influence on the physical and mental development of children and adolescents. As a result, experts found a number of problems that result from overreliance on smartphones.
Dr. Zheng Yan and Professor Lennart Hardell conducted a special study in this field. It includes articles from national and international research on the complex effects of mobile technology for infants, toddlers, children, adolescents and parents. "There are about three billion children and adolescents, said Yang. "Most of them were, or will different users of mobile technologies".
Scientists found the risk of using mobile phones while driving, walking and Cycling. Dangerous radiation in the use of mobile phones to brain development of children. They analyzed the impact of mobile technologies on cognitive control and early brain development. There are risks of increased behavior through pressure from peers and social media interaction.
Source: VistaNews
More
Comments: 0
Views: 226
Worst nightmare: in the Network appeared "live" pictures of the iPhone 8 (PHOTO) In the last months of rumours and alleged leaks regarding the iPhone 8, arrive punctually. And published on the Internet a schematic image of the novelty suggests that in the bowels of Apple in General completed work on a radical redesign of this device designed to please fans of the company on the tenth anniversary of the iPhone. Some leaks, however, make horrified even fans of Apple.
The Network got a new batch of live photos of the iPhone 8, the author of which is a Latvian blogger Benjamin Gaskin. On the quality images we see the camera in the typical aluminum chassis with double vertical camera, a fingerprint scanner on the back and screen in the entire front panel. In other words, shown in the photo gadget collected all the worst rumors about the upcoming Apple smartphone.
Also read: Microsoft accidentally published online the secret images of Windows 10
No redesign, glass enclosure or built-in display fingerprint scanner. From the current iPhone 7 Plus new features a larger display and no Home button. The screen looks as expected, from above and below we see a wide indentation in example LG G6, although some leaks indicate fully frameless panel.
One hopes that we are talking about the Chinese copies of the iPhone 8. At least in certain of Gaskin.
The launch of new products is expected, as always, in September, along with the updated S-variants of existing families.
More
Comments: 0
Views: 169