This cosy little harbour is built in Halkidiki, Greece, architect Eva Safegu. The house was called Olive Tree House, and indeed he has something in common with an olive tree.
Olive Tree House is located near the olive grove and has an area of 21 square meters, it was designed simple and easy, if necessary, to the house it was no problem to be dismantled and even be transferred to another place. As the main material for the walls of the house was chosen chestnut wood and metal. It would seem that because of the metal in the house can be very hot but the walls of most rooms are made in such a way that they are woven from twigs and leaves, which allows for the permanent ventilation to keep the inside temperature at an acceptable level.
Creating perforations within the walls of the house cost architecture is not cheap, as it is quite a complex process requiring little time and a lot of experience, but the effect is certainly impressive.
"All the components of prefabricated buildings, however, the design carefully takes into account the position of the sun to provide shade and to complement the views," explains architect in a press release: "Perforated textile pattern inspired by the olive trees"
In such a small olive house fit bedroom, living room, fitted wardrobes, kitchenette and toilet with sink, shower but, alas, only on the street.
Olive Tree House is completely Autonomous, electricity comes from an array of solar panels, water stored in the tank and going in the rain, and the waste from toilets is composted.
More
Comments: 0
Views: 204
Microsoft has called for an "always connected" computer

At the Taiwanese Computex conference 2017, Microsoft announced the creation of "ever-connected personal computers using built-in SIM cards.
The idea of embedded SIM (eSIM from the embeded SIM), which is tightly mounted in a modem PC, smartphone or IoT device, is not new. For example, the clock Samsung Gear S2, and S3 already uses this technology. However, at the conference Computex, held in Taipei (Taiwan), eSIM said so much that it seems it will become popular, literally in the next year.
So, Microsoft representatives told about the "always connected" computers, the development of which was supported by the key manufacturers of hardware — Intel, Qualcomm, ASUS, Dell, HP, Huawei, Lenovo, VAIO and Xiaomi. Furthermore, the implementation of eSIM in the 835 Snapdragon (Qualcomm) will mean that all new Android smartphones will be able to get online easier, faster, with no extra plastic and holes in the housing.
Truly massive eSIM can be, if they will pass Apple, which traditionally sets the fashion on the exterior of SIM cards. It is the iPhone maker was the first to require a micro-sim and then the nano-sim. Now it is time to completely abandon the SIM cards in the conventional sense.
The benefit eSIM can be felt with the spread of Gigabit Internet and 5G networks. Built-in SIM card will be part of the infrastructure, "always connected computer, wherever it was. The real revolution eSIM will implement in portable devices such as detectors and sensors, elements of the Internet of things.
More
Comments: 0
Views: 214
The developers have created an app to transform sketches into intricate portraits 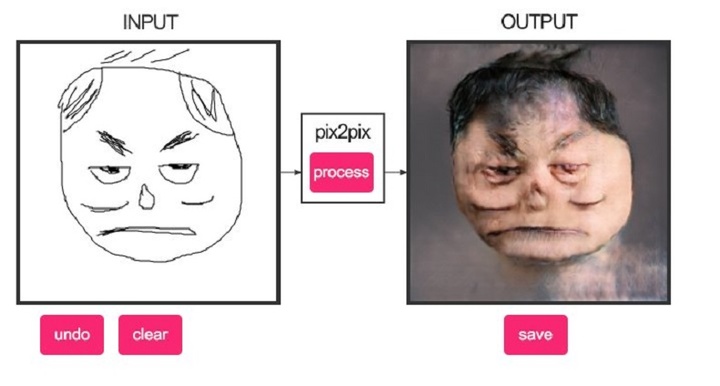 The developers have created an app to transform sketches into intricate portraits
The basis of the application is entrusted with the use of neural networks and machine learning technologies
The authors of the project pix2pix introduced an online application that can convert created in a graphics editor the outline of the face in a photo-realistic portraits.
This writes N+1.
The basis of the application is entrusted with the use of neural networks and machine learning technologies.
The component that creates the neural network, called direct translation of the images (Image-to-image translation).
Instead of creating an image from scratch, the system matches the existing data with the outline of the user.
It actually has some abstract "idea" of the look of the eyes, nose or mouth of a person and where they are, this "representation", it takes on the sketch.
To be trained in creating photo-realistic portraits you can here.
Neural networks are used for styling images under paintings, realistic deformation of the image, coloring and the like. Similar technology can be used not only for entertainment, but to assist in the work of the designers.
More
Comments: 0
Views: 212
China invented a new form of transport
For Chinese companies CRRC was not enough just to create an Autonomous car or train. She decided to come up with a completely new form of transport, writes ANDROID.
Autonomous high-speed rail transit (abbreviated to ART, from Autonomous Rail Rapid Transit) is a kind of mixture between tram and bus. ART moves on the road as the bus, but only on roads with a special layout, like a tram. It is modular, as the train and carriages can be added and removed, depending on the number of passengers. Each car holds about 100 people.
And, of course, ART can move without a driver, although it is there for safety at the time of the test. Trambus moves along a pair of lines drawn on the pavement, and has a number of sensors to avoid interference.
ART is also fully electric, and dissatifying charge can travel up to 25 km away. the Goal of the project is to build a fast and roomy transport for cities who have no money for the metro or tram network. ART is like a bus, but is more reliable and holds more passengers.
The first ART-line now constructed in Zhuzhou, and the plan will go into operation somewhere in 2018. And while it is possible to come up with a new transport name, not abbreviation.
More
Comments: 0
Views: 182
Neural network self-learning create portraits

In the global web, and in particular in social networks, huge popularity is gaining technology which can transform black-and-white pencil sketches into realistic pictures of people. In so doing, it helps the neural network self-learning.
The program, which is called pix2pix available for all visitors site fotogenerator.npocloud.nl. She's trained to detect human features on the object, trying to create a realistic image. But he can rarely manage, but the results are more than often different from the expected image. The pictures are very often frightening work, as claimed by the users themselves.
Source: an
More
Comments: 0
Views: 236