Apple has launched a platform for Business Chat 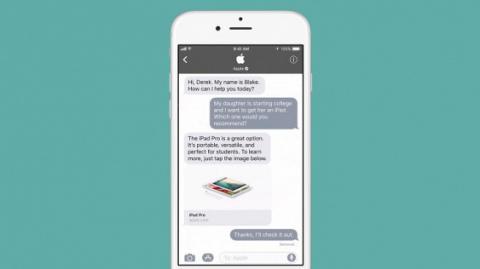 New turn iMessage into a communication platform that can compete with the Messenger from Facebook, and allow businesses to interact with customers, writes TechCrunch.
Business Chat will appear on iOS 11, of which entrepreneurs will be able to delegate part of their functions applications into iMessage. So to book seats on the plane or to consult with a specialist, the user will not need to leave the chat.
Business Chat will be integrated with other products to serve customers such as LivePerson, Salesforce, Nuance and Genesys.
Companies will be able to integrate all business processes in the program, say the developers. A new feature will allow customers to schedule appointments and make purchases in a Business Chat.
See also: Apple invented his box of pizza
In may, a similar tool introduced the microblogging service Twitter. The company has allowed entrepreneurs to communicate directly with customers, conduct surveys among them and recommend the products.
More
Comments: 0
Views: 209
Apple iPhone 8 may lose the support of important technology

From the coming iPhone 8 waiting for a really drastic change. Judging by the rumors and leaks, it has to be the first Apple smartphone with an OLED display, it has virtually no part, and the fingerprint scanner will be integrated directly with the screen. All the parameters should be the iPhone 8 one of the most advanced phones on the market, with the exception of data transfer rate. According to recent information, Apple will be forced to abandon the use of important technology.
It is no secret that Apple often resorted to the use of multiple manufacturers to produce various components in their devices, be it displays, camera modules, memory, etc. Often, this does not affect the operation of devices, but in the past year, some iPhone 7 and iPhone 7 Plus transmit data on LTE at noticeably lower speed than other smartphones. It was connected using LTE modems from Qualcomm and Intel. The decision from the latter is inferior in its capabilities that Qualcomm offers.
It is reported that this year Apple will again use the services of Qualcomm and Intel. At that time, as Qualcomm already has a modem with support for data transfer speeds of up to 1 Gbit/s, Intel will not have time to give Apple in the required number of similar decisions.
Many major mobile operators have already promised to launch before the end of the year Gigabit LTE network, but if the rumors are true, the new iPhone models this option will not be supported.
Source: 4PDA
More
Comments: 0
Views: 202
Scientists: a visit to the Church will help to strengthen health

A person can improve their health by going to Church. Sure American scientists from Vanderbilt University.
To receive the results of its theory, the experts conducted an experiment, inviting you to take part in it more than five thousand people. Then they were divided into two groups, the first of which continued to live a normal life, and the second regularly went to Church.
The second category of people after telling the experts about improving your health and Wellness. They become easier to tolerate stress and negative life situations. The participants of the first group, no positive changes could not boast.
According to researchers, standing in the temple, the people are relaxed and quite different look and analyze what is happening around. After a while they are not so sensitive to every stimuli, thereby maintaining personal health.
Source: VladTime
More
Comments: 0
Views: 174
Network hackers watching for almost a half of users

Experts in network security found that hackers gathering almost half of the users of the Network. The results of the study were published in the academic journal ToDay News Ufa.
According to experts, almost half of user information available to hackers. This is due to the fact that every second modern man is the device through which it enters the Network. It is through hacking the system security of the gadget, the scammers get access to personal data. For example, in the media published an article, which reported that the company producing household appliances Vizio agreed with us regulators to pay a certain amount to be able to monitor the users.
According to scientists, from the manufacturer this behavior is unacceptable, it shows disregard for their customers. In addition represent a threat to children's toys with access to the Network. Hackers can access them and listen to the conversations that are happening in the family. Experts also said that in this way the scammers are able to obtain personal information and use it for personal gain.
Earlier, the website "Current news" reported that hackers were able to break the service OneLogin.
Source: an
More
Comments: 0
Views: 208
What "I think" neural networks — an explanation on fingers