The Ukrainians have developed a gadget for correct posture

Ukrainian startup Mevics, which is designed to help people have a smooth posture, left on Kickstarter.
Now the price of product is $ 49, – informs the Public.
Mevics is a gadget that helps to control posture during work.
Miniature device, fixed under clothing with a magnet or Velcro and vibrates every time a person slouches or sits in the wrong position.
"Mevics is good posture, improved blood circulation, proper breathing and the lack of a pinched nerves. Mevics forms the habit to sit straight," write the developers.
For operation of the device requires a smartphone with which it is synchronized.
App Mevics App monitors and displays the current position of the spine, collects and analyzes data about the activity and allows you to control the device.
The developers also added in your fitness-tracking mode for those who are constantly sitting in the office, and also it can adapt and develop the correct posture children.
More
Comments: 0
Views: 238
Created the world's first smartphone that runs without battery 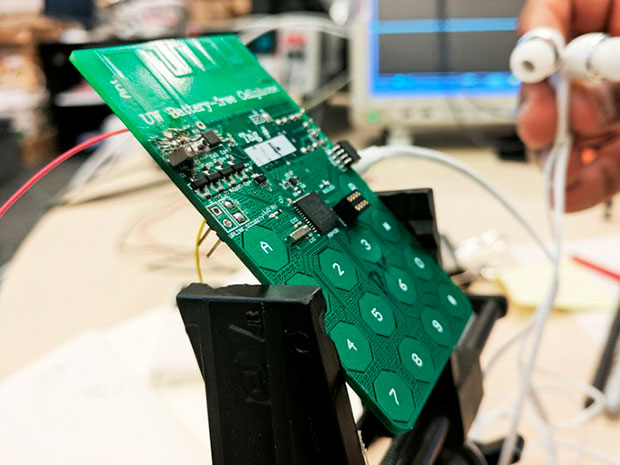 A team from the University of Washington in Seattle headed by Vamsi Tally could boast of a very serious achievement. Scientists have created a prototype phone that does not need battery.
The fact that the device is powered by ambient energy. Its internal components have been completely developed from scratch to achieve maximum energy savings.
When you create a device were used the emitter which is activated for a time defined by the radio waves. This means that this phone is still required to operate the base station, but the creators believe that cell towers can also serve for this purpose.
The most attentive users of Windows devices could draw attention to the fact that all Microsoft driver dated 2006.
Yet bezakkumulyatornyh phone is only a prototype, having only a dial button and a led indicator. It plans to add E-ink display.
More
Comments: 0
Views: 240
Invented a compact refrigerator that runs on electric field

Scientists from the University of Pennsylvania built a refrigerator the size of a can of beer, which uses for cooling of the electric field vector.
The refrigerator consists of ceramic rings, each of which is 12 heating elements, the size of a coin. The rings rotate in opposite directions. When the elements are moving in the direction of the heated part, the electric field causes them to release heat. On the contrary, when the elements move towards the cold end, the electric field is canceled, causing them to absorb heat. So they are rotating, heating and cooling different parts of the refrigeration system.
"Compared with the traditional method of cooling electrocaloric effect allows to increase cooling efficiency and capacity while reducing the size of the fridge, says the study's author and Professor at the University of Pennsylvania Cimino Zhang. – With the development of electrocaloric materials, new cooling units to replace the old, for example, in air conditioning. In particular, they can be used in the cellars to cool the servers, batteries in electric vehicles, for medical purposes and climate control."
According to scientists, the new device can be improved because the prototype uses only two rings and ceramic items available on the market. "We plan to focus on creating Navi ceramic and polymeric materials that can create electrocaloric effect at very low voltage," says Zhang.
More
Comments: 0
Views: 214
Scientists have explained why children with high IQs live longer

The researchers explained why children with high IQ live longer. Such conclusions were made by the representatives of the University of Edinburgh.
According to scientists, a high level of intelligence at school age due to the low risk of death from stroke, cardiovascular disease and cancer, which may cause Smoking.
After research that was previously conducted, scientists have offered explanations for this phenomenon. But they took into account only the data of recruits, which were observed just before reaching middle age.
It is known that scientists have conducted a complete study of the dependence of intelligence and longevity. For the study, they processed the data of 60 thousand inhabitants of Scotland who were born in 1936. However, studied only those who at age 11 was tested for their level of intelligence.
It was found that those who had a high level of intelligence, had far lower mortality before reaching 79 years of age.
We will remind that not so long ago, experts from the United States and England have identified 40 genes which are responsible for human intelligence. To find these genes has succeeded with the help of data processing 80 thousand people.
Source: VladTime
More
Comments: 0
Views: 221
Drones: what are they and what can they
Drones are the future of military technology, sure most professionals. What types of drones exist today and what they can perform tasks, tells DW.Really explore the possibilities of unmanned aerial vehicles (UAV) for military purposes has just begun. It is not surprising that many governments today do to understand what is possible with drones. Here, the European Commission approved the release of 1.5 billion euros for the development of new military technologies with the use of drones.
List get money companies long - largely because manufacturers UAV much as the technologies of their production. DW collected the main types of terrestrial (not marine) military drones, and described the tasks to be performed.
Micro - and nanodrone
Electronic aircraft the size of a large insect is not only a spectacular toy of a Hollywood blockbuster, but also a means of warfare. The most famous very small drones are models Black Hornet in size from 1 to 4 inches. British soldiers used them in Afghanistan in 2013. They help to see what is happening around the corner or behind a wall where hidden enemies.
The remote control that fits in one hand, helps to control movement of the drone, which shows happening at once with three cameras. The mini-drones, produced by the Norwegian company Prox Dynamics may hang in the air for up to 25 minutes on a single battery charge. The radius of the mini-drone and a half kilometers. Model Black Hornet can be equipped with night-vision goggles and recording infrared radiation.
Small tactical drones
For purposes that are beyond the immediate areas being used by small tactical drones. They have not revile in your pocket, but they can stay aloft for up to 12 hours without a break and have a range of up to 90 kilometers, as, for example, the model of the Fulmar. It's produced by the French firm Thales. Range of tasks - collecting various intelligence data.
In the same class is the model Aladin of the German company EMT, but with a smaller radius of only 15 kilometers. The us army relies on a model of Raven manufacturing company AeroVironment. To launch into the air Raven can simple throw, the range of this UAV with electric motor - about 10 miles. He can follow commands from the ground or to work offline.
Workhorses
Most of the drones for military purposes is a UAV of medium size, the "workhorses" of modern armies around the world. In the United States to denote them using the abbreviation of MALE - UAVs capable of working a long time at medium altitude, or HALE - high altitude.
In this class, one of the leaders is the model of the Heron, produced by Israeli company Israeli Aerospace Industries. Heron, his plans to rent a Bundeswehr capable of flying for 52 hours at an altitude of 10 thousand meters. It weighs more than a ton, and the wingspan he's got 16 meters. The model is in service with countries such as USA, Australia, Morocco, Turkey, India and Canada.
The Bundeswehr also uses the Luna model, which produces the company EMT. This model UAVs have flown thousands of hours in Afghanistan and Kosovo since the beginning of 2000-ies, but they also have tangible disadvantages: limited in range of hundreds of kilometers that scouting drone is not enough.
Large drones
Perhaps the most famous of the military drones are large aircraft of the US army. Among the models of these drones should also mention The Predator and its larger sibling, The Reaper. They sell General Atomics at a price of 16.9 million dollars apiece.
They are used in military operations to eliminate suspects in the U.S. terrorist activities in countries with which Washington is not officially at war. Such extrajudicial killings have been criticized by human rights organizations.
The Reaper with a range of up to 1,000 kilometres and a flight time up to 14 hours can be equipped with a variety of drones to engage targets on the ground. Besides the US, several NATO countries, including Spain, France and the UK, use similar UAV. Very similar in appearance to The Reaper model CH-4 from China is the armies of Egypt and Iraq.
The largest and most expensive drone is a model Global Hawk production company Northrop Grumman. Each copy costs $ 130 million, not counting required to use the infrastructure on the ground. Global Hawk flies higher than the usual civil aircraft at altitudes of up to 18 thousand meters.
It is typically used to monitor zones of armed conflict, but its main goal is different - this drone is able to intercept the signals of mobile communication. While Northrop Grumman manufactures the only UAV of this size, having such capabilities, but it is expected that in the near future will compete with them Chinese drones CH series production company of the China Aerospace Science and Technology Corporation.
More
Comments: 0
Views: 210