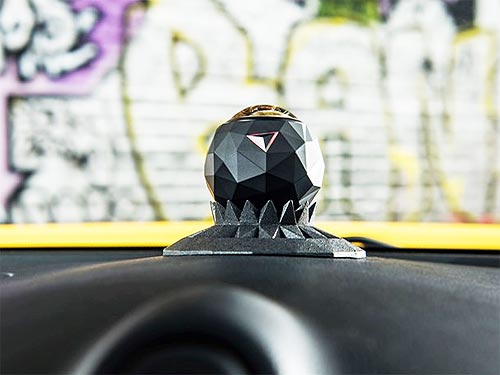 Nissan unveils its latest innovation for drivers, which inspires the spirit of adventure. The world's first integrated multi-purpose camera with 360º review, called JukeCam. The camera is fixed on the dashboard of the car, but in a matter of seconds turns into an action camera on the helmet of the athlete-extremal.
Dash mounted video recorder can help reduce insurance premiums and to confirm the application for insurance. The camera can also be useful for fans of extreme sports.
Nissan JukeCam – conceptual development, created in collaboration with the company 360fly, a manufacturer of cameras with 360º review. Dual purpose purpose JukeCam reflects a stunning new video shot in 4K resolution. Starring – Xpogo team fans of extreme jumping on a pogo stick.
Nissan has created an innovative camera-recorder JukeCam - Nissan
During the filming of a performer of tricks Dalton Smith (Dalton Smith) jumped over three standing in a row of the Nissan Juke, only once landed between them. Thus, set a new world Guinness record in the category of "bounce on the pogo stick through the maximum number of challenges in a number of cars." The record was filmed on a Nissan JukeCam to provide viewers unique shots taken from the first person.
Dalton Smith commented on his Guinness world record: "to Beat the world record has never been easy, but we are always ready to accept the challenge. When Nissan came to us with the idea of JukeCam, all gladly agreed to participate. Nissan JukeCam is a fantastic concept for drivers; no doubt I would have found this camera to good use".
Nissan made "intelligent" on-Board cameras for cars more accessible to buyers, using the 360º technology to enhance traffic safety. An example is used the technology of the circular review (IAVM) is an innovative camera system, which facilitates the process of Parking. This device provides a panoramic view of space around the vehicle "bird's eye", helping drivers to detect obstacles during maneuvering at low speed. For the first time the system was introduced on the model of the Qashqai in 2012.
Since the release of the Juke to the market in 2010 in Europe and has sold almost 800 000 of these vehicles; and 133,000 of them were equipped with a system of IAVM. As one car installed four cameras in total, the Juke was installed 532 000 cameras since the start of sales.
Nissan has created an innovative camera-recorder JukeCam - Nissan
Nissan became the first car brand, which started using cameras mounted on cars in order to increase the level of traffic safety. In 2002 the Primera model was the first produced in Europe by car, which has been applied to the camera which was switched on when reversing. Later, the technology is called Rear View Monitor.
Recent years have seen an impressive increase in the popularity of cameras-DVRs installed on the dashboard of the car. In the UK the sale of cameras increased by more than 900% in just two years.2 They are used in order to provide insurance companies and the authorities evidence in resolving any disputes about responsibility for an accident.
Fully integrated camera JukeCam as the DVR is able to conduct continuous shooting of up to three hours. In the mode of the action Cam outside the car dashboard, battery JukeCam will last for two hours.
Nissan has created an innovative camera-recorder JukeCam - Nissan
Helen Perry (Helen Perry), chief marketing Manager for the Juke from Nissan's European division, commented: "Nissan is always striving to innovate and create new devices for their customers. Camera JukeCam was born out of the desire to create a device corresponding to the active lifestyle of our clients. It is perfect for on-road use as a DVR. At the same time, it is quite versatile: it is easy to remove and to shoot from the first person".
Juke comes in an innovative lineup of crossovers Nissan. Market segment crossovers was created by Nissan in 2007, when the Qashqai – it is a European best seller among crossover vehicles.
More
Comments: 0
Views: 211
iPhone 8 will be an advanced system of laser focus for AR

Apple is preparing to surprise enhanced functionality dual camera in a future iPhone. Crown creations in 2017 is to support augmented reality. Confirms this edition of Fast Company, citing its own sources familiar with Apple development. According to these data, one of the new "Apple" smartphone (guess what kind) can get a new system for 3D laser-focus that would better not only to focus when taking pictures, but also improved sensing depth of the object for applications of augmented reality. The report says that Apple engineers are still working on the integration of the system in the device and their success will depend on whether we will see her in September, or will have to wait until 2018. Expected, Apple declined to comment on these data. Note, the rumors about the system VCSEL (vertical-cavity surface-emitting laser) occurred in the past. Moreover, go to suppliers of necessary components. Their cost is estimated at an additional $2 on a single instance, which further refers it to the premium version of the iPhone. An end to all speculations will be laid in September, when will the official premiere of the new generation of "Apple" devices.
Source: Mobiletelefon
More
Comments: 0
Views: 199