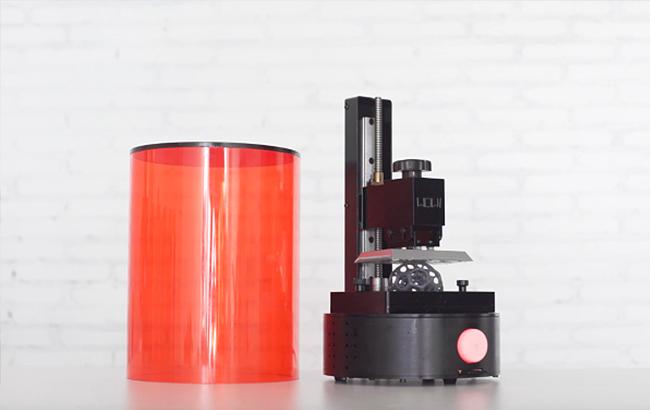 In China launched a campaign to raise funds to manufacture a cheap 3D printer In China began collecting funds for the production of 3D printer SparkMaker, which will cost $ 129. It is reported 3Ders. So, it is noted that a 3D printer based on LCD display that prints in high resolution. At the moment, the campaign has already gathered more than 65 thousand US dollars, which is three times greater than the original goal of the campaign. "Despite the fact that 3D printing has been popular for several years, hardware was expensive, not allowing many people to explore the infinite possibilities of creativity that it allows. In addition, sophisticated software for design and 3D modeling have become a prerequisite for working in 3D. SparkMaker compact, beautiful and user friendly. It is simple printing with one button, convenient download of multicolor resins and ready-to-print downloadable structures", - stated in the message. We will remind, earlier it was reported that in Denmark, the team of architects Create.dk, with the support of the Technical University of Eindhoven (Netherlands) will build the first in Nyborg the house, the walls and ceiling of which will be printed on a 3D printer of concrete.
The full text is available here: https://www.rbc.ua/rus/news/kitae-sozdali-3d-printer-stoimostyu-129-dollarov-1501244481.html
More
Comments: 0
Views: 212
The head of the Kickstarter will leave his post

The head of Kickstarter, Yancey Strickler (Yancey Strickler) announced resignation from his post. "We start the search for the next Director General of the Kickstarter", — he wrote in the official blog.
Strickler was one of the three osnovatelei crowdfunding platform. The business was launched by the former CEO, Perry Chen (Perry Chen), which Strickler was replaced in 2014, and designer Charles Adler (Charles Adler), who has gone from Kickstarter in 2013. Before becoming the head of the Kickstarter, Strickler worked for many other positions, he was an Evangelist, was engaged in the support of the community and team building.
Yancey Strickler: "Since I became Director in 2014, we had a few big jumps: we tripled the total amount of investments into projects, Kickstarter has launched in 16 countries and has built an outstanding team of leaders at every level"
Kickstarter was founded in new York in April 2009. In just 8 years, representatives of various start-UPS attracted through the platform $3 billion this amount includes the money that went to Finance successful ideas, and those that have been invested in projects that have not reached the desired level. In other words, in fact, this figure at about 85% less and is about $2.75 billion among the projects that received funding through the platform is Oculus Rift, which Facebook bought for $2 billion and a smart watch Pebble.
Source: therunet.com
More
Comments: 0
Views: 175
The cyber criminals have learned to hack a car wash

Hackers have learned to crack contactless car wash. This information acts as a Motherboard.
Experts, who cracked the sink, found a vulnerability in the operating systems operating on the Windows operating system. To take control gates, the water spray device and a robot hand, the experts just figured out the password.
They managed to outsmart the system, even though protection from burglary and customized IR sensors that prevent hackers to capture unsuspecting motorist. They wrote the script themselves autoriseerimist in Windows CE, which waits for process to finish washing, and has a car gate. To do this, hackers used only the IP address of the service.
In the period of its work, the specialists not only successfully bypassed the infrared sensors, but also took control over the entire cleaning system that in the future could have a negative impact on the possibility of exit from the car of the client. All the results of the study programmers were transferred to the Ministry of internal security of the United States.
Source: VladTime
More
Comments: 0
Views: 191