In connection with the rapid development of smartphones and tablets, the notebook market is experiencing a period of decline. New models of computers differ only in the different autonomy or performance that fails to impress the consumers. However, the Concept Creator, designers have found a solution – create a gadget with two screens.
As the developers of the laptop will look virtually the same as normal, but the second screen will be deployed at the keyboard and will display the trackpad and the need to display some extra buttons and information. This solution will completely solve the problem with engraving and make the changes on the market of modern technologies.
With such developments from Apple, as Force Touch, 3D Touch, you can create a sense of working with a full physical keyboard, while making her touch. Based on this the probability is high that the first this idea will realize it was the American "Apple" of the company, and already behind her and others.
Source: an
More
Comments: 0
Views: 192
Impressive specifications Xiaomi Mi Mix 2

Xiaomi officially made an appointment for 11 September, in which representatives of the Chinese company will tell and show Mi Mix 2. It is expected that the device will raise the bar even higher the useful area of the front panel, and updates the hardware. However, if confirmed, today's leak Mi Mix 2 will surpass all expectations. In the Chinese social networks there were pictures of a fragment of a smartphone screen, which supposedly the main technical characteristics of the frameless device: 6,2” with a resolution of 2960 x 1440 pixels (same with Samsung Galaxy S8+), still unannounced chipset Snapdragon 836, 256 GB ROM, 20-Megapixel main camera, the battery, 4400 mAh battery and MIUI on Android 9 Oreo. And last causes the most skepticism, because Xiaomi is not usually too active with updating Android versions, not to mention to be among the first, after the novelties of the Xperia. However, a year ago, the company has surprised Mi ceramic Mix so that it can be. Confirm to not wait so long.

More
Comments: 0
Views: 209
Bug in Instagram led to the leakage of phone numbers and email addresses of celebrities

Instagram has found a bug that allowed hackers to access the phone numbers and e-mail addresses of users. The problem was present in API through which the service interacts with other applications.
The company did not report which users have been attacked. However, just two days ago it became known that the attackers broke into the account of a popular singer and actress Selena Gomez (Selena Gomez) and posted pictures with Justin Bieber (Justin Bieber).
cnn.com
"Recently we found that one or more persons gained access to contact information of some popular users of Instagram, in particular, to the e-mail addresses and phone numbers — using a bug in the API Instagram, said the company. — Passwords from accounts were not stolen. We quickly fixed the flaw and are now conducting a thorough investigation".
The company has notified the owners of all confirmed accounts on the crash contact information. She advised to be attentive to calls and messages from unknown numbers, and emails.
At least once the attackers were able to exploit a bug on Instagram "some accounts". Developers are not told whose it accounts and how many of them were. Access phone numbers and email addresses in conjunction with the methods of social engineering could allow attackers to gain complete control over the accounts.
So, most likely, was the account hacked Selena Gomez on Instagram which was signed by 125 million people. Her account was closed on Monday, but later in the day the singer again got access to it.
Source: 3DNews
More
Comments: 0
Views: 190
Appeared the patent image of yet another augmented reality glasses (photo)

In the patent application startup Magic Leap, the cost of which is estimated at $4.5 billion, there was augmented reality glasses image over which the company operates. This drew the attention of the publication Business Insider.
The images depict small glasses with oval frames of rims and sensors on the right and left brackets. This is the second public patent application Magic Leap.
Glasses — not the end product of the startup, said Julie Gaynor, the representative of Magic Leap. “As you know, we serve many patents for approval which takes a lot of time. Therefore, what is depicted here is not our product,” she said, RIA “Novosti”.
However, sources close to the company noted that the design shown in the patent, which is close to the desired product Magic Leap. But in fact, the company looks more cumbersome, and between the lenses there is also a depth sensor. The man who had seen the schema of the product Magic Leap, said that in the current design is working on the startup team, there's only one camera on each arc. He also added that glasses made of very thick, like hipsters”.
Investors and other VIPs who got the prototypes for Magic Leap points in the spring, said the device they were testing was less than current models of VR headsets, but more cumbersome in comparison with other glasses such as Spectacles here Snapchat.
More
Comments: 0
Views: 254
Apple has found a new partner to create enterprise solutions 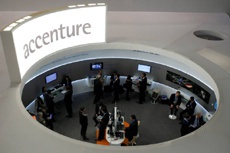 The list of partners Apple in the corporate market has been enriched with Accenture providing management consulting, IT and outsourcing. In the framework of cooperation will create new iOS apps to business problems.
Some programmers and experts in user interfaces, Apple and Accenture will work together in special teams, helping banks, retailers and other corporate customers to create software for the iPhone and iPad.
It is planned to focus on applications that will be useful to consumers and employees of companies directly communicate with customers. As for technology, one of the main areas will be augmented reality.
"The partnership will make full use of the power, simplicity, and iOS security, a leading enterprise mobile platform and Accenture, the leader in the industry and the field of digital transformation to help companies find new sources of income, improve labor productivity, improve customer service and reduce costs," — said in a press release Apple.
In addition to Accenture, to promote iOS in the corporate sector in collaboration with Apple doing Cisco, Deloitte, IBM and SAP.
Source: servernews.ru
More
Comments: 0
Views: 188