Xiaomi has released a cup with automatic heating and charging.
Xiaomi has introduced another “smart” product for the home - a cup with automatic heating and charging.
What it is
At first glance, this is an ordinary mug made of ceramic. It is durable, and it can also be safely washed under water and cleaned.
All electronics are hidden inside the case. If you put a mug on the wireless charging station that comes with the kit, auto-heating is turned on. The cup maintains a constant temperature of + 55 ° C. But after 4 hours, if no action occurs, the heating is turned off. To turn it back on, pick up the mug from the station and put it back.
Also, the station can be used separately for wireless charging of other gadgets: smartphones, headphones, watches, etc. Its power is 10 watts.
More
Comments: 0
Views: 161
Scientists decide to create robots with emotions

Scientists Kinson Man and Antonio Damasio described an approach that will help create robots with an "artificial equivalent of feelings."
They spoke about this in an article published in Nature Machine Intelligence.
Researchers reported that the key to the emergence of emotions and feelings is homeostasis - the desire of the system to overcome environmental conditions, restore internal balance and self-reproduction. This desire is the basis of the instinct of self-preservation.
According to Man and Damasio, the most promising way to create thinking and feeling robots is a combination of deep learning techniques and the so-called soft robotics (designing robots from materials that are most similar to biological tissues). Such a combination will allow the robots to develop a certain sense of their own vulnerability and a homeostatic reaction to external changes.
Robots with emotions
Scientists also made a reference to the William Ashby experiment, conducted in the late 1940s. Ashby demonstrated an example of a homeostatic reaction in an inanimate system. He created an apparatus called a homeostat - an electromechanical device through which electric current was passed.
When changing the input parameters, the relays on the units of the homeostat were switched in such a way as to return to the preset equilibrium state. Man and Damasio propose combining such a system with machine learning to create robots that can independently evaluate how they interact with them and adjust their reaction accordingly.
Unlike a robot that is hard-coded for each situation or has a limited set of [predefined] behavioral responses, a robot that cares about its own survival can creatively solve the problems it faces, ”the authors of the study write.
However, scientists are not sure that such an approach will lead to the emergence of real emotions in robots, and not to the creation of a “mechanized simulacrum”. Whether mental phenomena can be reduced to processing information on an arbitrary medium is a question requiring a long and detailed clarification.
In any case, the creation of robots capable of exhibiting homeostatic reactions should help to improve their “behavioral autonomy”. Thus, it will be easier for people and robots to interact and resolve conflicts.
More
Comments: 0
Views: 184
GomiBall clever pet toy created 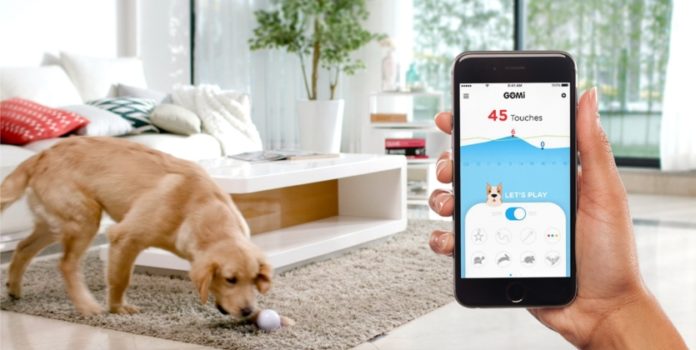 Few of the owners of dogs or cats love to leave their pet alone at home for a long time - because this negatively affects the mental and even physical condition of the pet. That is why the developers of the startup company GomiBall decided to please the pet owners with their development of the same name, releasing it on the Kickstarter crowdfunding platform - the development itself is an unusual playing ball for pets. Its uniqueness lies in the fact that it has a truly unusual and wide functionality at a fairly attractive price - and will not let your pet get bored!
The GomiBall ball is a remotely controlled device - to which you can configure automatic work and sleep cycles - made in the form of a small ball with a small motor inside. A user of an Android or iOS device can program the action cycle of the toy so that it rolls around the house, thus inviting the pet to play with it, which will allow it to be occupied for a long time.
The ball itself has really high-strength manufacturing materials, and on the outside it is covered with a special polycarbonate compound officially approved by the US Federal Commission for the Control of the Quality of Medicines and Food - the ball, thanks to the sensors built into it, can detect if it is bitten or touched and emit a slight vibration, which will pet the pet more. Thus, you can leave him almost the whole day alone and be sure that he will be absorbed in playing with the GomiBall ball.
In addition, this toy becomes an excellent trainer for pets, allowing them to stretch their limbs from time to time and prevent the development of various diseases associated with insufficient pet mobility during the day. It is known that at the time of release the toy will cost $ 149, although now users can spend $ 79 on it on Kickstarter!
More
Comments: 0
Views: 216
Scientists have created "unsinkable" metal for ships
Modern ships are distinguished from their "ancestors" by their extreme strength and reliability. But sometimes one big hole is enough for even an advanced ship to sink. Scientists from the University of Rochester have created a unique material that can significantly increase the survivability of water transport.
The basis of the development lay superhydrophobic coating - a special water-repellent composition. Having processed two metal surfaces with this material, scientists connected them together so that the coating was turned outward with two sides.
As a result of processing, the metal disk used to test the technology turned out to be almost unsinkable. Researchers made several large holes in it, which were supposed to simulate holes on a real ship, but even when immersed in water, an experimental sample floated to the surface.
According to scientists, a similar technology can be used in combination with any metal. In the future, a new type of material will improve the survivability of ships and increase the safety of their passengers.

Blue light from our phones and computers can negatively affect a person’s life expectancy.
The prolonged exposure to blue light coming from our phones, computers, and many other household appliances can negatively affect a person’s life expectancy. Scientists suggest that the blue waves that emit LEDs damage the cells of the brain and retina, even if there is no direct incidence of light rays. Scientists conducted a series of studies on an ordinary fruit fly, as a result of which it turned out that the light waves released during the burning of LEDs accelerate the aging process.
Is blue light harmful?
Light is electromagnetic radiation, each color of which has its own specific amount of energy. At the beginning of the light spectrum there is red, which has low energy and is easily perceived by the human eye, closer to the top of the spectrum is blue light, which has the highest energy and is able to penetrate the retina, quickly wearying our organs of vision.
Artificial blue light, which comes from modern gadgets and devices, occupies the most “harmful” part of the spectrum, the wavelength of which is between 380 and 500 nm. Light waves of this range are the shortest of visible radiation, while scattering most actively.
Scientists have long confirmed the negative effects of blue light on humans, but still continue to conduct more detailed studies on its effects on the human body and still do not plan to dwell on the information received. So, scientists from a university in Oregon published the results of new research in the journal Aging and Mechanisms of Disease.
During the experiment, researchers used an ordinary fruit fly - Drosophila melanogaster, whose organism, due to its cellular development mechanisms, is similar to other animals and people.
During the study, researchers used 3 groups of flies. The first group underwent daily 12-hour cycles: 12 hours in the light and 12 hours in the dark. The second group was always in the dark and was used as a control, and the third group was subjected to filtered blue light. According to the results of the study, it was found that the flies from the first group had a shorter life span. A study of flies that were exposed to 12 hours of blue light confirmed damage to retinal cells and even brain neurons, reducing the ability of flies to climb fences.
In the experiment, mutants of fruit flies were also used, some of which did not have developed organs of vision, but even brainless flies showed brain damage and impaired coordination. Thus, flies did not have to see the light in order for it to cause disturbances in the body. Researchers also noted an interesting fact that flies try to avoid blue light if given a choice.
Scientists note that the presence of natural light is crucial for the circadian rhythm of the body - a cycle in which a number of physiological processes occur, such as brain activity, hormone secretion, cell regeneration, etc. However, the increased exposure to artificial light, which is increasing in the modern world, is one of the risk factors for sleep failure and many other circadian disorders.
The use of LED lighting, various gadgets and devices exposes people to more and more light in the blue spectrum. But due to the fact that these technologies are quite new, it is not possible to find out about their impact on a person throughout his life.
More
Comments: 0
Views: 167