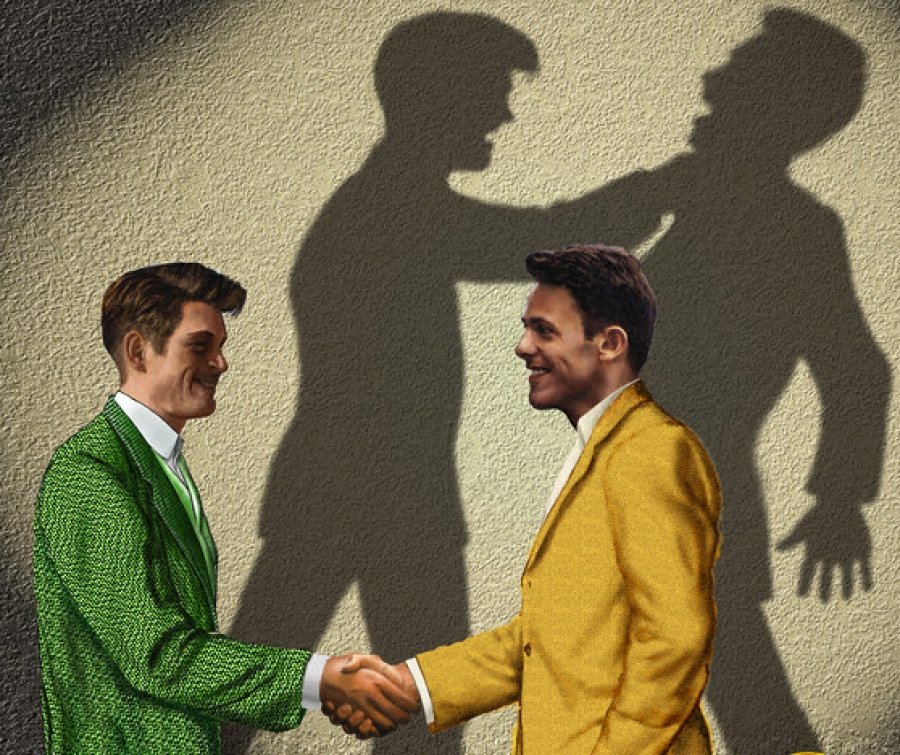 Personal non-property and property rights for the invention belong to the author and protected under current legislation.
We, almost every day faced with situations where someone behaves in Your company is not quite fair or not quite correct, or observed them from the side. Very often, we scrolled to a particular situation in mind, and then find the answer to obscure questions.
So, when we then find the answers or you can answer them in the course of communication, receiving a certain dose of adrenaline, his charisma and character, to defend his innocence and to convince her of his companion.
In the period between these events, termed "Time H" when you need to begin to act in the matter of judgment, and win over, to defend their point of view and get the desired result.
Innovative social network revelations "Time H" is this gap between truth and lies. And members of this social network in their posts and blogs in his tapes situations and chat rooms have the opportunity to lay out a description of these situations. As they encountered them, under what circumstances, how they solved them, how to come to certain conclusions, listen to the advice of members of this network on the output of a supposedly unresolved situation, and of course, when you request help in the ribbon of situations have the ability to need advice or real help.
The network is not intended for commercial use in the form of promoting their goods and services but for meetings in discussing and solving problems described in the tape situations - of course Yes, and this is one of the main functionals.
Of course, the author and inspirer of ideas not fully reveal the whole structure of this startup and its components.
The idea is open for investment and complete its foreclosure.
+380505238948
More
Comments: 1
Views: 1617
Mobile app verbal accounts "Innovator".

Personal non-property and property rights for the invention belong to the author and protected under current legislation.
In the author's ideas for innovative mobile app of the verbal account in the name revealed the main goal of this startup. Functionality will be the counting of letters, words and phrases for a separate period which is predetermined by the user. Below, more details will be described all the features of the mobile application verbal accounts "Innovator".
Now, this startup is similar to the mobile app about counting the number of steps for a separate period. There will also be counting all the verbal sounds which the user utters. He may at the end of the reporting period, such as one day, reduced the table to see the counting reprimanded by the user of letters in the alphabet, phrases, in the form of a table. By the way, the user will also see the number of similar phrases that will be it for your internal analysis. For example, to compute the word-parasites, or combinations of words-parasites. Not quite how it sounds correctly, but the functionality of this startup will be red to withdraw bad words ( Mat ), which also is kind of a cautionary analysis for the user. Also, at the end of the reporting period and the data will be summarized in a table on reprimanded proposals, which again will serve as the analysis for this user.
When you download this mobile application and enroll in a new user will clear the record of his speaking to further recognize and identify verbal expressions of the same user. Other verbal expressions consisting of a dialogue with another person, accordingly, will not be taken for staff analysed the reporting of the analysis. You can simply record all conversations in advance to include such a function for internal control of the verbal conversations of all the people around them in close proximity to Your gadget.
So, the user will now be able to see and analyze all of their speaking skills that will serve him as analysis and future adjustment of its verbal expressions. Version of the mobile application verbal will, for ease of analysis by the user, to provide guidance on the current verbal analysis of future errors and correct and adjusted verbal expressions. This may allow to equalize and raise to a higher level of spoken language appropriate to the registered user through personal and automated analysis mobile application verbal accounts "Innovator". Also in manual mode, on request of the user, the startup will be able to adjust individual queries verbal expressions that he would ask.
This idea is open to investment, and full of redemption.
+380505238948
More
Comments: 1
Views: 1321
Mobile app gender priority "Innovator".

Personal non-property and property rights for the invention belong to the author and protected under current legislation.
This idea refers to the global approach in its implementation, as the mobile app gender priority "Innovator" will provide service on differentiation of male and female in the use of smart devices. Functionality innovative applications to adjust any smart device gender the user priority that will be described below.
So, the very mobile app gender priority works quite simply just. It is recommended to be installed on all existing operating systems, since the launch of the new user and the organization to use the already existing users, the functionality of the application will offer to use them in the first place. It will all happen - when you install this application in manual mode for existing users, the functionality will be asked just one question - are You male or female? When answering such a simple question, the app adjusts all the existing standard firmware is the operating system of any gadget or smart device according to the selected gender priority. That is, for a male will be chosen corresponding colors, sound effects and a specific mobile application. For example, applications associated with fishing, hunting or motoring theme. For a female will also be a corresponding theme configuration version of the mobile application.
For new users of existing operating systems, the author of this innovative idea offers when you first sign up to ask in the default mode, which gender the new user.
The content of the applications gender priority "Innovator" will be standard for both men and women. Of course, the user is given full choice changing all the existing standard settings. Also, as an additional feature, in the settings you can include additional feature for a nursery. This feature will allow parents to simplify the use of the gadget of his children. The functionality of the application with these settings will keep track not needed and are not valid age of the children, respectively, to block them at the stage of initial use. All these are not correct actions will be in the form of reports, sent to parents via SMS or email. The task on the children's functionality can also be adjusted.
So, in this mobile app we will be able enough to learn how to use it, but later, will receive a complete and acceptable, the result of use, referring to our gender status - that is, men will be given the male function menu and women, respectively, women. Our children will also remain under our strict parental control.
This idea is open to investment, and full of redemption.
+380505238948
More
Comments: 1
Views: 1418
Smart comb "Innovator". Personal non-property and property rights for the invention belong to the author and protected under current legislation.
The name "smart comb" is already in use. Platform "Innovator" and the author of this idea is his artistic project smart comb "Innovator".
Smart comb "Innovator" in their capabilities will already be known functions of alignment and the ionization of the hair. There will also be a backlight while using this smart device that will be convenient in poorly lit environments. All these functions will be applied mostly to combs of the type "massage brush". But that's not the main opportunity a smart comb "Innovator".
The back side of the smart comb"Innovator", in the embodiment of the massage brush is equipped with a touch panel. All the control functionality that has been prescribed above, will be made on this touch panel. But this smart comb can also be as a smart device that will perform some of the functions of gadget - receiving and processing SMS messages, photo viewing and video content, social networking, and much more that can, as an example, smart watches. That is, the user of this device may, without departing from the process of restoring beauty to be and to work on the Internet as it is needed. Control and adjustment of the work smart comb "Innovator" will produce a special eponymous mobile app, which will be paid no the basis for download and use. Especially convenient is the use of barbers and stylists who can, during operation, throughout the day not to release the comb from his hands.
Of course, use this smart technology is possible and on the combs of type "comb". Only the smart brush will increase in size and weight. Charging such a smart combs will be performed as standard procedure and using the new wireless charging technology.
The mobile app will be able to assess the condition of Your hair with the help of special sensors that will be placed at the base of the bristles smart combs, to form the result and display on touch screen smart comb "Innovator". Remotely, Your personal stylist-hairdressers, having access to Your account in the mobile app smart combs, will receive the report such analysis of Your hair. Further, for Your and his decision, will determine Your appropriate next steps.
The idea is open for investment and for its full redemption.
+380505238948
More
Comments: 1
Views: 1480
Innovative mobile app "Grand-service".

Personal non-property and property rights for the invention belong to the author and protected under current legislation.
The author presented ideas to their mobile app offers to collect all existing services. In the opinion of the moderation platform "Innovator" is a simple enough idea, but if it is properly and professionally checkout, this service can show itself at the global level quite fast and promising! Below will be spelled out the basic functionality of this application.
So, the author offers new users a streamlined method to use, which is the absence of any registration and reference to the accounts or the accounting records. On the front page of the mobile application will be a list of the main and most popular services that users prefer to have in the startup. The list will initially include a default list of apps, but anyone can customize it to fit your needs. Prioritizing is a voice control method. Innovative way are the hand gestures, including the clapping and clicks. That is, the user programs in this application, the number and frequency of such gestures and their ties up to a particular kind of services. The app will be able to work with locked screen so programmed gestures and voice commands your app will recognize, and in this mode too.
Innovative app "Grand-service" can be applied to existing mobile services. It can be attached to them, and have the same functional and innovative management methods. For example to existing programs and applications that control the functions of "smart home". Or services call a taxi or food delivery at home. One snap of the fingers, and the app provides its user the ability to order pre-programmed service. Moreover, according to a predetermined function, the screen of the gadget will be automatically unlocked for faster use of this application.
To sum up this short presentation, the innovative mobile app "Grand-service" will be able to provide its users with a simple menu to use existing services and bind to existing similar services.      That is, one mobile resource will be able to replace a number of similar resources that simplify the users the whole process of ordering appropriate services.
This idea is open to investment, and for its redemption
+380505238948
More
Comments: 1
Views: 701