Personal non-property and property rights for the invention belong to the author and protected under current legislation.
The main component of the complex smart-sleep "Innovator" is a smart bed "Innovator". This is the most high-tech part that includes both mechanical movements and electronic equipment with the appropriate software.
And so, as previously spelled out in the project smart blankets "Innovator", mechanical movement smart beds with magnets, able to tighten and improve the smart blanket. This is a simple inner rails with magnetic tips, which "attract" the ends of the blankets , which are magnetic elements, and place the blanket in the desired position. To cover the bed will also be done in automatic mode. The smart bed has the ability to change its height and dimensions, again using mechanical components. Of course, all this is controlled by the user through the mobile application. Light colored lights works on the principle of ambient light - the less light, the higher light emission. And Vice versa.
Mechanically it is possible to change the angles of the parts of the smart bed that is comfortable both in home and in medical environments. In a separate trim bed equipped with automatic air ionization and salt elements that positively affect during sleep. One of the main features is a built-in innovative device that is now being tested, which allows to suppress the surrounding noise.  So silence of the sleep is assured.
Systems smart-sleep "Innovator" is presented in full. Dear investors and krautheimer - study and participate in the development of this project.
The idea is open for investment and complete its foreclosure.
+380505238948
More
Comments: 1
Views: 1610
Smart touch book-cover "Innovator".

Personal non-property and property rights for the invention belong to the author and protected under current legislation.
The next wearable smart device that simplifies the readers of the literature the reading process and, if not strange and unusual, its smart capabilities has increased the promotion of reading most of these books. Smart touch book-cover "Innovator" is a brand new device, analogues of which do not exist, that will be interesting enough for potential investors or buyers this original idea. Platform admins "Innovator" will try to squeeze all the functionality and principle of operation of this presentation, that would be very clear and understandable all the essence of the smart cover.
So, touch plastic case book smart cover has a frame structure, and can with the help of special clips and mobile straps to hold inside the book of any size and weight. That is, the user inserts the book in the smart cover, with movable slats adjusts its size and secures it with clips. But it is a mechanical component of a book smart cover.
Basic smart opportunity lies in several features:
1). Control and correction of all work of this wearable smart device is the eponymous mobile app that can pair with any gadget;
2). Retractable miniature bracket that slides out of the back of the cover is equipped with a camera and led element. The camera takes those open pages that the user reads the smart cover of this book. Shooting-read book will serve to memorize page after closing the book. Put simply, it is a bookmark function. When the book is closed, on the front side of the touch book, the smart cover, which is equipped with a touch panel, the graphic will be placed last page. And when next time the user picks up the book, stuck with the smart cover, he sees an image of the last page to read it. Led is used to illuminate the pages of the book during the reading process.
3). The functionality of the smart cover will correct the reading process in terms of its correctness will follow the process of reading, that it would not exceed the permissible limits. If you exceed the permissible norms will be served a special signal. He will split time reading thus to optimize and speed up the reading of the book. The mobile application will prompt the beginning of a reading if the smart cover with the book is remotely.
4). Reading may be accompanied by light melodies, if it is like user. Of course, the whole list of tunes will be available as a mobile app, and in the touch book smart cover.
5). Conveniently enough parents will follow the process of reading books of their children.
Now, a new smart device carries a innovative method of reading books, which is much easier it will make the novelty and appeal among different age groups.
This idea is open to investment, and full of redemption.
+380505238948
More
Comments: 1
Views: 2601
System smart-sleep "Innovator". Smart blanket "Innovator".

Personal non-material and proprietary rights to the invention belong to the author, and are protected according to the norms of the current legislation.
For a complete set of the system, the smart sleep "Innovator" lacks a few more elements. The "Innovator" platform and the author of the original idea present to your investment attention the following element - a smart blanket "Innovator".
Each element of the smart-sleep system "Innovator" has its own purpose. That smart blanket is endowed with several smart features.
First of all, a smart blanket in its internal structure has a natural filler and inflatable elements. Inflatable elements can change the sizes of a blanket if necessary both in thickness, both in width and length. Compact and light compressors will not be visible to the user of this smart blanket.
Secondly, the smart blanket has in its structure magnetic flexible elements that prevent the blanket from sliding off the bed during sleep, and not only. The internal movable, magnetic mechanism in the smart bed, in automatic mode, with the help of these same magnets can correct the blanket.
Thirdly, the smart blanket has flexible light elements that can change the color of the light radiation depending on the programmed functions. Naturally, all these processes are controlled and programmed by the mobile application smart dream "Innovator".
Also, the blanket will have several smart functions - built-in alarm clock, sensors that will determine your body's body temperature and its respiration rate.
So, we have the following, but not the last, element of the smart-sleep system "Innovator" for your investment viewing.
The idea is open both for investment and for full redemption.
+380505238948
More
Comments: 1
Views: 1490
Mobile app virtual personalized body parts replacement "Innovator". Personal non-property and property rights for the invention belong to the author and protected under current legislation.
Very unusual and alarming name of the mobile application. In fact, when read carefully in the presentation, which will be described below, it will be understood that the functional has a sufficient number of innovative components and main direction is on the comic and gaming theme. Platform "Innovator" recommends to investors to pay attention to this startup, since he will be serious competition for similar projects.
So, lately came out in the work of a number of mobile apps in the form of a game are the transformation of existing photographs. These apps, games and comic form, distort the face and change its size, the photos make hand-drawn image, etc. In this presentation, Mobile app virtual personalized body parts replacement "Innovator" will be a different kind of transformation - the transfer of body parts from one photo to another.
It works like this - on the screen of the gadget, the functionality of the application allows you to place a picture that the user will convert, and a few photos, with which and it will be that the transformation. In manual mode, the user will note the available body parts in the main pictures that he wants to replace, and the program will select from the other photos that were previously selected for this procedure, and to change them. For example, the user chose the photo with his image for her transformation. Next he selects a number of other photos from his gallery, of which he will take the parts of the body. When the screen appear all these photographs, he notes, for example, eyes. And transforms the pictures change eyes. Then he picked his nose. Also, to make them look better photography has changed the nose.
When he completely finished the conversion process, it retains it. But the title of this photograph functionality produces itself, based on all those photos that took part in it. Further, knowing the people who were in the photos and images which participated in the transformation of the main picture, the user in comic form, you may send them a new a photo you've taken, putting the parts of their bodies, that there is inserted.
In a more simple version, the user can simply select the number of contacts from their phonebook, which are his images, to specify the parts of the body that wants to replace and start the conversion process. The resulting image can also be used in a Comedy show or newsletter.
Summing up the presentation of the author's ideas, we can say that there is a new gaming and comic conversion of photographic materials. It can be applied at the first stage of development for humans. Next will be a version available for the animals.
Maybe our presentation did not accurately disclose the full. For a more accurate and more in-depth presentation, you can associate the contact information with the platform "Innovator" and to obtain the necessary information.
This idea is open to investment, and full of redemption.
+380505238948
More
Comments: 1
Views: 1564
Bed-pool "Innovator". 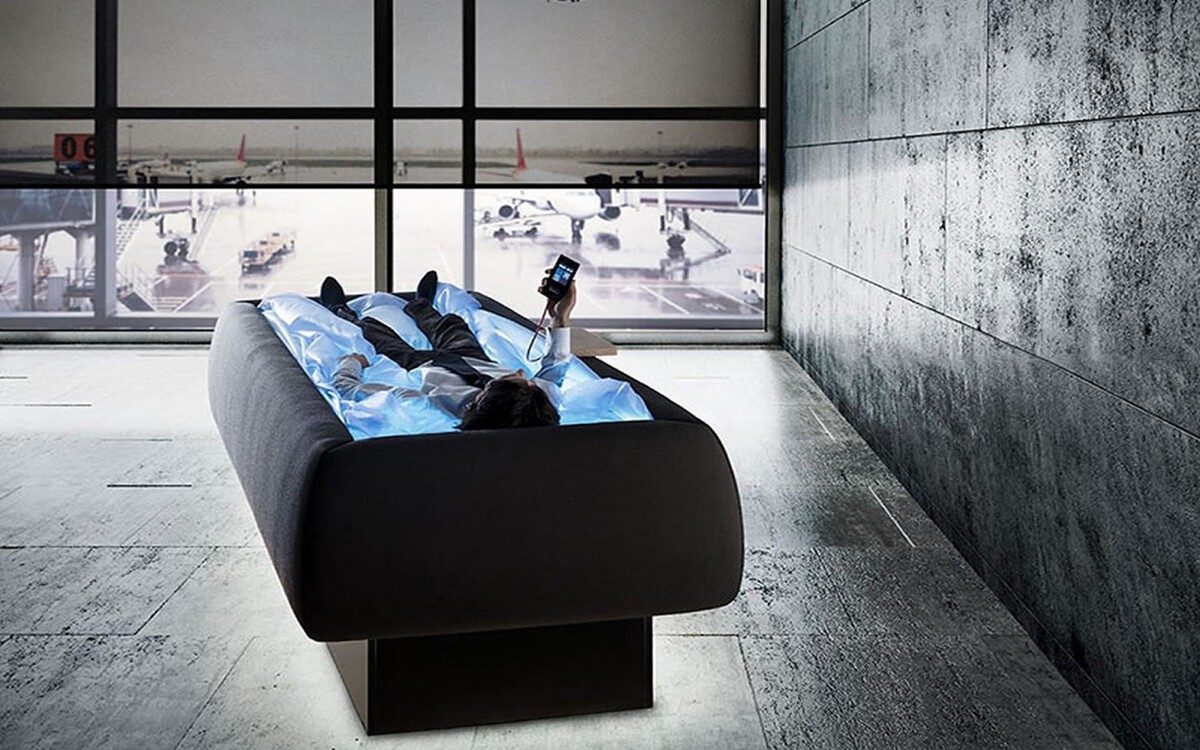 Personal non-property and property rights for the invention belong to the author and protected under current legislation.
The idea is that the bed is made in the form of a pool, or bath. While you sleep in this bed model slivaetsja water required composition (plain, salted, etc.), and the required level. The bed itself has climate control to maintain the desired temperature throughout sleep. Under the neck or under the rib cage on the person odevaetsya rubber ring or a mattress, which accordingly prevents the person from drowning.
The idea of this bed will work both in medical purposes and for everyday use.
The idea is open for investment and complete its foreclosure.
+380505238948